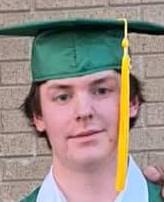 The funeral for a recent Laurens District High School graduate who died in a single-vehicle crash Sunday is to be held today at Chestnut Ridge Baptist Church.

According to South Carolina Highway Patrol Trooper Gary Miller, Thompson-Wilkie was driving a 2007 Chevrolet pickup truck south on Highway 221 when he ran off the right side of the road and lost control. The vehicle then veered left, hit a utility pole and overturned.

Miller said the victim was not seat-belted and was ejected from the vehicle.

Thompson-Wilkie graduated from LDHS in February and was employed at ACE Hardware. He is the son of Laurens County Sheriff’s Office Capt. Robert Wilkie and Dana Wilkie and Brandi Thompson.

Funeral services are scheduled for 3 p.m. today (June 16) at Chestnut Ridge Baptist Church with the burial to follow at Pinelawn Memory Gardens.

The accident still under investigation by the S.C. Highway Patrol and the Spartanburg County Coroner’s Office.