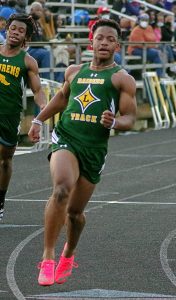 Laurens junior speedster Jayden McGowan says he considers himself a football player who happens to run track in the spring.

As McGowan brought home gold in the Class 4A meet, the Clinton High girls 4x100m relay team of Patience Adams, Niashia Wright, Deasia Boyd and Maya Smith continued the Red Devils’ dominance in that event with a state championship of their own at Lower Richland.

“I was working on fundamentals and the phases of my race,” McGowan said of the week leading into the state championship meet after winning both events at the Upper State meet as well. “But the mental stuff had been tough, knowing that it was going to be close. I was thinking it was going to be a lot closer than it was because I’d raced those same guys (at Upper State), and it was a smaller gap.”

McGowan said winning both titles, which he did in front of friends and family who made the trek to Spring Valley, is “a big deal.”

The runner will turn in his track shoes for football cleats this week as the Raiders finish up spring practice and play their annual spring game Thursday evening. McGowan is a do-it-all wide receiver for LDHS who already has gotten the attention of several NCAA Division I football programs. In addition to the impressive times on the track, McGowan boasts a 5.013 GPA in the classroom and has interest from Army and Navy, for which he would receive appointments to attend, and Ivy League schools such as Harvard and Dartmouth, neither of which offer true athletic scholarships, but do put together academic packages for student-athletes and make those offers. He said he has scholarship offers already from Middle Tennessee, Georgia Southern and Kent State. 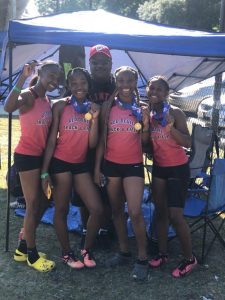 The Red Devils’ 4x100m relay team of Adams, Wright, Boyd and Smith captured Clinton’s second state title in that event over the past three state championship meets. The quartet finished with a time of 49.81.

Clinton won the state championship in 2018 and finished second in 2019. No state meet was held in 2020 due to COVID-19 restrictions.

“Our girls are just committed to running well,” said Clinton head coach Dontavius Glenn. “They love track, and each day they’re coming out and working hard to get better.”

In the state finals, Glenn said the Red Devils were able to pull out a close race late.

“Our anchor leg (Smith) kicked into another gear,” he said.

Glenn also credited the Red Devils’ tough regular-season schedule for getting his team ready for the Class 3A state meet.

Glenn said he also spoke with McGowan the day before the state meet to wish him luck.

“We’ve got some speed in Laurens County,” Glenn said.