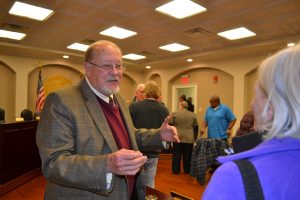 Clinton, South Carolina – With the news that Clinton City Manager Bill Ed Cannon “has retired effective immediately,” Clinton City Council on Monday night voted to name Assistant City Manager as Interim City Manager.
The announcement came tonight Monday, Feb. 8, after council returned to open session after a short executive session, when Mayor Bob McLean asked for an emergency change to the agenda, which requires a two thirds vote and the reason for the change. Council had gathered for a financial bond workshop, and the executive session, detailed as a personnel matter in the city managers office was the first item on the agenda.
“The fact is that we do not have a city manager, and our assistant City Manager reports directly to the City Manager. He has no one to report to,” McLean said. “We are amending the agenda to appoint an interim city manager to report as city manager.”
In a roll call vote, council voted to approve the agenda change, and then Council Member Gary Kuykendall made the motion to name Thomas Higgs as the Interim City Manager, with council individually voting to approve the motion.

In other business, council voted unanimously to appoint Director of Utilities Joey Meadors as the alternate board member representing Clinton on the Piedmont Municipal Power Association. Mayor Bob McLean serves as Clinton’s voting board member, and before his resignation, Cannon had been serving as the alternate.