MASK CHALLENGE – Clinton native William Lucas (Bill) Walker, center, created the “Who Am I? Mask Challenge last summer. He’s been in Clinton all month following the death of his mother from COVID.

Clinton, S.C. – Clinton native William Lucas (Bill) Walker created “The Who Am I? Mask Challenge” last summer because he wanted to do something to make a positive difference and help bring the COVID-19 pandemic to an end. He never dreamed that within six months the virus would take his mother’s life.

Walker, an Emmy Award-winning television writer in Los Angeles, has spent the month of January back in Clinton after the death of his mom, Betty Walker, on Jan. 4.

“All it took was one person near her without a mask,” Walker said. “Eleven days later they started getting the vaccine but she had already died from COVID.”

When numbers began to spike in July, Walker said he heard the head of the CDC explain that if at least 90 percent of Americans wore masks, within three months the pandemic could be contained.

“Hollywood usually jumps on everything and I couldn’t believe there weren’t all these movie stars and sports heroes doing a mask campaign,” Walker said, explaining he could imagine the impact of stars like Tom Brady and Julia Roberts promoting the wearing of masks. 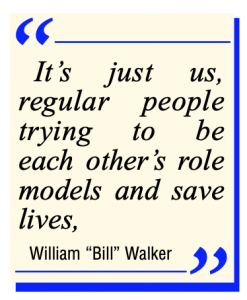 He imagined short videos like public service announcements of people explaining why they wore masks.

“In a pandemic, I realized that stars aren’t our heroes. Everyday people become the heroes, so the tagline became, ‘Your voice could be the one who saves a life.’” Walker said. “It’s not political because you’re not preaching about it. You’re just telling people why you wear a mask and no one can argue with that, and it takes less than three minutes.”

The challenge has reached 34 countries and 47 states.

Directions on the website’s “Welcome” page link gives all the steps to making and posting the short videos, which are typically from 20 to 50 seconds.

That page shows three videos from an Olympic diving team member, a long-haul COVID-19 survivor and actor Beau Bridges. Another page shows a video by the mother of Grammy-winner Billie Ellish, and that video prompted dozens of the singer’s young fans to give their reasons for wearing masks.

The website and the You Tube channel video log have other Olympic athletes, and a Broadway page highlights the famous CATS singer and Tony award winner Betty Buckle. There is also a 3-year-old and dozens of others who want to keep their loved ones healthy.

“It’s just us, regular people trying to be each other’s role models and save lives,” Walker said. “But now we are way more than three months later, numbers are so much higher because people didn’t wear masks, and now my mother has died.”

As a country, people have gotten complacent, Walker said.

Posted in Breaking News, News and tagged #whoamimaskchallenge, covid, covid-19, heroes, Who Am I Mask Challenge