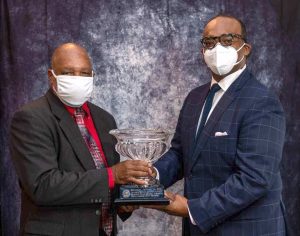 VIRTUAL NAACP – Among the many awards presented at the recent virtual meeting  was the Speaker’s Award, presented by Laurens Branch of the NAACP president Rev.David Kennedy, left, to speaker Rev. Robbie Shortt.

Laurens County, South Carolina – When a large group of white liberals and seven African Americans met in the wake of a string of deadly race riots in Springfield, Illinois, the result was the formation of the National Association for the Advancement of Colored People.

It was 1908 and the anti-black riots, including lynchings, had become commonplace even in the former home of Abraham Lincoln.

The historical context of the formation of the NAACP was among the highlights presented by Rev. Robert (Robbie) Shortt, the pastor of First Church of God, Lee Street in Darlington, and the keynote speaker at the Laurens County Branch of the NAACP’s First Virtual Freedom Fund Banquet held during the MLK weekend via Zoom.

“We must become strategic thinkers,” Shortt said, referring to the theme of the night’s program, “When We Fight, We Win.”

“It is just as vital, ‘Knowing How to Fight, Learning How to Win,’” he said, referring to Biblical accounts where God allowed Gideon to use only 300 men, trumpets, pitchers and torches against a much larger Midianite force, and elsewhere in scripture when David used river stones and a slingshot to bring down the Philistine giant.

“Their plans of attack were opposite of what the opponents were thinking,” Shortt said. “We are fighting a systematic giant called racism … which is woven and draped into the fabric of America upon falsehood, misinformation, untruths and ignorance as its undercurrents, and masked behind certain individuals in the fields of government, law enforcement, banking, healthcare and technology and industry.”

Shortt commended Georgia’s Stacey Abrams, who, although she lost the race for governor, helped determine the areas where voters’ roles were diminished and through “her actions and diligence and effort flipped the Presidency and the U.S. Senate.”

Shortt also said he admired the entrepreneurs who had gone before in Laurens.

“I admired the Laurens Back Street. It was an environment and culture of innovative geniuses and, unfortunately, it was truly one of the lost gems of Laurens County,” Shortt said. “There has to be efforts to push for governmental assistance in housing and entrepreneurship for people of color and women. Civil rights is more than just a movement for unjust laws and racial inequalities but it’s a movement in economic empowerment, healthcare reform, prison reform, and racial equality in every area and places where injustice resides.”

Among the dozen or more award winners were Carolyn Shortt as 2020 Woman of the year; Linda Pearson-Goode as C.D. Beasley Service Award winner; Rev. Shirley Clark with the Julia A. Pearson Award; and Rauch Wise, winner of the Legal Defense and Justice Award.