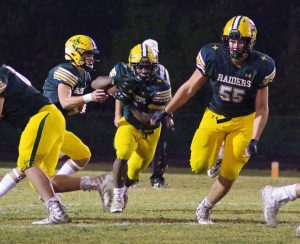 LDHS’s Cole England (55) committed to The Citadel this past week and will officially sign on Feb. 3.

“They were really the first to reach out to me, and they showed me that I’m a guy they really want,” England said. “I think I can fit in really well there.”

England was chosen to the South Carolina Athletic Coaches Association all-state team, the all-Laurens County team, named all-Region 2-4A and picked for the Wendy’s High School Heisman Award for LDHS.

“I think he’s going to be a great player for them,” said LDHS head coach Daryl Smith. “He’ll wind up playing a bunch of years for them. He has the size, and he’s extremely quick for an offensive lineman.”

England is familiar with the Bulldogs’ flex-bone offensive scheme, which is similar to the offense LDHS ran under former head coach Chris Liner. He said he expects to play tackle and/or tight end for Citadel head coach Brent Thompson, who has turned around the Bulldogs recent football fortunes in the Southern Conference with a 26-20 overall record and an upset win over Georgia Tech in 2019. With the Southern Conference shut down for the fall due to COVID-19, the Bulldogs played four nonconference games in 2020. The SoCon has announced a spring schedule for 2021.

“First, I would like to thank God for allowing me to be in the position I am,” England posted on Twitter as he announced his commitment to The Citadel. “A special thank you to my parents for constantly supporting and pushing me to achieve my hopes and dreams.”

He also thanked his coaches, teachers, teammates and the community for their support.

Familiar faces will be awaiting England when he arrives at The Citadel in August. Former Raiders and brothers Wes and Summie Carlay are on the Bulldogs roster. Wes Carlay will be a redshirt sophomore defensive lineman and Summie Carlay is a graduate transfer from South Carolina on the offensive line.

While The Citadel is the state’s military college and has a Fourth Class System, England said he the military component is part of the deal for incoming students, including football players.

“It is required, but it’s not something that made me want to go there,” said England, who has a 5.28 grade-point average at LDHS. “I want to be an orthodontist after college, so I’ll be majoring in biology.”

England is expected to sign his National Letter of Intent on National Signing Day on Feb. 3.