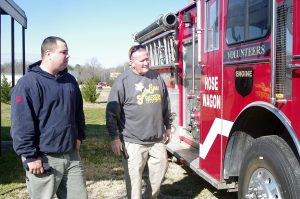 Jeff Madden, right, takes a look at a fire engine donated to a Belize volunteer fire department by the Joanna Volunteer Fire Department along with Joanna firefighter Eric Caughorn.

The words, “Long live the brotherhood,” are written in script on one of the Joanna Volunteer Fire Department’s trucks, and it’s something Chief Robert Plaxico takes to heart.

“I truly believe that,” Plaxico said, pointing to the words on the truck. “That’s what it’s about – just trying to help people.”

So, it may be no surprise that the brotherhood extends well beyond the county lines. On Saturday, it stretched to Belize as two older fire trucks and a trailer load of equipment and gear began their journey from Joanna and Cross Hill to a new home in the Central American country.

Both trucks were well past their prime in Laurens County, and the Placencia Volunteer Fire Department in Belize will be the third home for each of them. The yellow pumper from Cross Hill is a 1983 Chevy, and the fire engine donated by Joanna is a 1987 model.

They will replace a Placencia truck with a broken chassis, which can no longer carry water.

David Kafka, a former Mt. Pleasant firefighter who moved to Belize, put a plea out on Facebook for help in locating a truck for the Placencia department, and that started a whirlwind of connections that came together in Joanna Saturday. 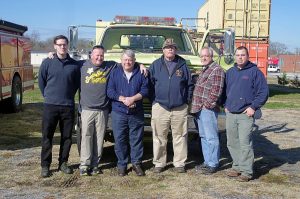 Joanna firefighter Larry Hall had worked with Kafka in Mt. Pleasant and decided to help.

“I saw Kafka’s post on Facebook and then talked with him and tried to figure out how to get this stuff to Charleston,” Hall said.

In the meantime, donations of turnout gear and other equipment came in from another volunteer department in Indiana to go with donations from Joanna.

“If it’s over 10 years old, we can use it,” Plaxico said, citing federal requirements mandating the retirement of older equipment. “It doesn’t matter if it sat in a closet for 10 years, it has to be retired. They don’t care about that in Belize.” 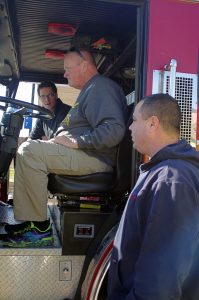 Jeff Madden, center, with son Kevin Madden, and Erick Caughorn take a look at the fire engine from the Joanna Volunteer Fire Department that was donated to a department in need in Belize.

The handoff of equipment and trucks was complicated by the spread of COVID-19, which halted international travel and some shipments.

But after several months, Jeff Madden arrived from the Lowcountry with son Kevin and volunteer Steve Bright to take the trucks and crates of equipment to Charleston, where they would be loaded on a U.S. Air Force transport plane bound for Belize.

“I talked to David down there, and he said they really don’t have anything,” Madden said. “So, maybe we’re doing some good.”

Both trucks needed some work – the donation from Cross Hill took more than a little to make it usable again, but the Belize department paid for the repairs. The Joanna donation seemed to know it still had work to be done, said Joanna firefighter Eric Caughorn.

“She purred driving over here,” he said. “It’s like she knew she was going somewhere.”