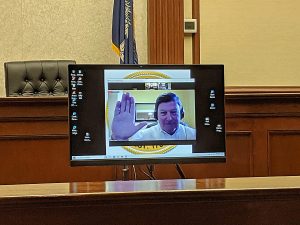 Above, County Councilman David Tribble is sworn in via video conference. At right, Council members Garrett McDaniel, Diane Anderson and Luke Rankin after taking their oaths of office Monday. 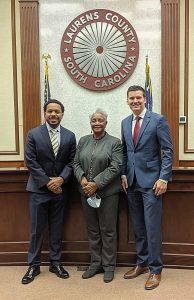 After each election cycle, Laurens County Attorney Sandy Cruickshanks is tasked with the swearing in of newly elected and re-elected county officials.

But Tuesday morning’s swearing-in ceremony, which featured four members of county council and Laurens County Coroner Vickie Cheek taking or re-taking their oaths of office, veered sharply from the norm.

“This is the first time I’ve ever sworn anyone in (on a computer screen),” Cruickshanks said when it came time for newly elected County Councilman David Tribble to take his oath. “But that’s 2020.”

Tribble, a Clinton businessman who defeated incumbent Council Chairman David Pitts for the District 7 seat in the Nov. 3 General Election, was quarantined due to COVID-19 concerns.

“I was just following the protocol, doing what the doctor told me to do,” said Tribble, who had been thus far asymptomatic during his quarantine.

He said the remote swearing-in ceremony is just the latest chapter in an odd election cycle.

“For people who are sales people and press-the-flesh politicians, this is just really strange,” said Tribble, who also served on council before leaving for the state legislature in 2010.

In addition to Tribble’s swearing in via video conference, Luke Rankin, who won the Republican Primary over veteran councilman Joe Wood in June at the age of 22, was sworn in for his first term on council, representing District 2.

Democrats Garrett McDaniel (District 3) and Diane Anderson (District 6) were also sworn in as was Coroner Vickie Cheek, who was voted into office after serving remainder of the unexpired term of Nick Nichols, who died in December of 2019.

Laurens County Sheriff Don Reynolds was sworn into a second term Monday night at the Hillcrest Judicial Complex in front of the vast majority of his officers and deputies.

After being sworn in, Reynolds then administered the oath of office to members of the department.

“I’m very, very proud of the support and the job that y’all do,” Reynolds said. “It may sound cornball, but y’all make me very proud. … You do a great job, and I appreciate every bit of it.”