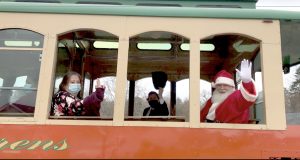 Laurens families gathered in front lawns and on street corners Sunday afternoon and for at least a few minutes were able to see Santa pass by, waving from the City of Laurens Trolley, and fire trucks with sirens blaring and city trucks decorated for the holiday.

“We saw lots of smiles on little kids’ faces and plenty of smiles by adults too,” said Laurens Mayor Nathan Senn. “We knew it wasn’t going to be the most impressive parade and it wasn’t designed to be. But we wanted to bring Christmas cheer to as many communities in the city as possible, and it seems like we did a pretty got job of doing that.”

Hannah and Joseph Scarlett came running out of their house on Melrose Drive to wave at Santa and city officials as the decorated trucks and trolley came by.

“This was a really great idea,” said their mom, Katie Scarlett, a Clinton Middle School teacher who, with her husband, Jeff, and three children moved in January from Florida to Melrose Drive in Laurens. “I think it was a really great response to keeping everybody safe with regard to COVID and everything that’s going on.” 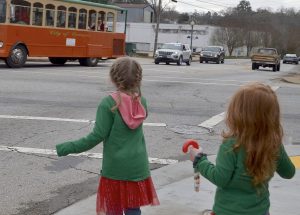 A similar sentiment was shared by Gray Court resident Crystal Wintjen, who brought her daughters, Nikita and Sydney, to the corner by Back Street Park to chat with friends and to wait for the little parade.

“There just hasn’t been much for the children to see, and so we came to Laurens and got something to eat and then came here to wait,” Wintjen said.

Main Street Laurens sponsors and organizes the Laurens Christmas Parade, and the organization quickly saw it wasn’t going to be easy in the current pandemic. The schools and church groups were telling Main Street director Jonathan Irick they would not participate, and The South Carolina Department of Commerce, tasked with managing requests for outdoor gatherings during the pandemic, had denied Christmas parade requests from the City of Greenwood. Then on Oct. 22, the City of Clinton received its letter that its request for a parade was also denied.

“This was a way we could have a parade and be sensitive to the concerns of COVID and to the schedules of our law enforcement,” Senn said. “One thing that made me the happiest was seeing the elderly people watching through the windows of the community room at NHC (National Health Care) and knowing they’ve been in quarantine and would never be able to see a parade even if we’d had one,” Senn said. “That’s another reason it was a huge success.”

The parade traveled at least two hours on a route that took it along almost 80 different roads within the city.