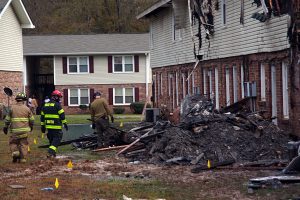 Fire investigators look over the remains of a fire that destroyed several units at Landau Apartments and claimed the life of a 3-year-old early Sunday morning in Clinton.

An early morning fire Sunday claimed the life of a 3-year-old in Clinton.

The Clinton Fire Department responded to the call around 5:45 a.m. The fire destroyed one block of units at Landau Apartments. Fire investigators were still at the scene Sunday evening.

In total, eight units were destroyed and 15 people were displaced by the fire.

The identity of the toddler killed in the blaze had not been released by the Laurens County Coroner’s Office late Sunday evening.

See more in Wednesday’s edition of The Advertiser.