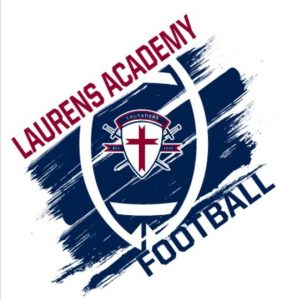 Clarence Bertoli scored three touchdowns and to lead Laurens Academy to a 30-14 victory over visiting Patrick Henry Friday night in the opening round of the SCISA Class A 8-man football playoffs at Todd Kirk Field.

Bertoli scored on touchdowns of 15 and 55 yards in the first half, but the Patriots rallied to a pair of touchdowns of their own to tie the game at 14-14 with three minutes left in the half.

Senior quarterback Thomas Lowry gave the Crusaders (8-3) a 22-14 lead with a six-yard touchdown run with about a minute left in the second quarter and Bertoli added the 2-point conversion to give LA a 22-14 lead before halftime.

That was all the points LA would need, but Bertoli added a 50-yard touchdown reception from Lowry  with 11 minutes to go in the third quarter to secure the playoff win. A Lowry run added the 2-point conversion for the 30-14 final margin.

Patrick Henry ended its season with a 7-4 record.

LA will face unbeaten Holly Hill Academy (10-0) in the second round of the SCISA 8-man playoffs next week. Holly Hill defeated W.W. King Academy 58-0 in their opening-round contest Friday night.