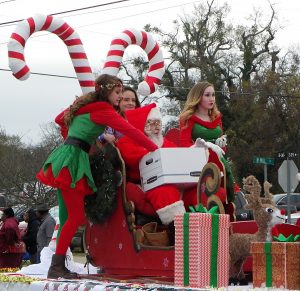 Santa makes a recent appearance at the Gray Court Christmas Parade. That parade and those in Laurens and Clinton have been canceled due to COVID-19 restrictions this coming holiday season.

The Gray Court Town Council decided at its recent October regular meeting to cancel this year’s town Christmas Parade due to the COVID-19 pandemic, becoming the first of the county’s three largest holiday parades to be officially called off.

Clinton will not be hosting its annual Christmas parade, and the Laurens parade is very much in doubt due to the pandemic.

Gray Court Mayor Stellartean Jones said the unanimous decision by the council was a difficult one.

“We really didn’t want to disappoint the children, but we gave it great consideration, and due to the pandemic and everything we would try to be safe and forego the parade,” she said.

The parade is annually one of three scheduled in Laurens County on the first Saturday in December. The day begins with the Clinton parade in the morning, Gray Court in the afternoon and Laurens in the evening.

Main Street Clinton Director Adele Alducin said a request to the state to hold the parade there was denied, so the Clinton parade has also been canceled for this year.

Main Street Laurens leaders have not made a final decision on whether or not to hold this year’s Christmas parades in their cities but expect a decision to be made soon. Like Clinton, Laurens has made the request for an exception to COVID-19 policies to the state.

Jones said the Gray Court Town Council held off making the decision as long as it could but ultimately decided to be cautious and look ahead to 2021.

“We’d like to have some discussions on other things we can do at the first of the year,” she said. “Hopefully, we can make up for it in the coming year by adding another festival or something like that when it’s safer. Maybe by spring we will be coming back to somewhat normal, but it’s going to be a while before we can turn back to our everyday lives.”

Jones said canceling the parade was made harder for council members with the passing of Councilman Adolphus Brewster, who chaired the parade committee, earlier this year. This would have been the town’s first parade since Brewster’s death.

“Oh, it was his passion,” Jones said. “I know he would be greatly disappointed. So are we, but we’d rather be safe than sorry.”