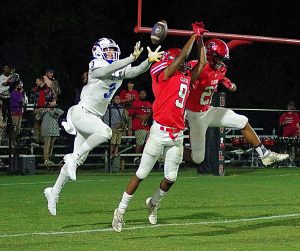 Broome blocked a 19-yard field-goal attempt with 16 seconds to play to seal a 27-26 victory over Clinton Friday night at Wilder Stadium.

The Centurions (1-0) had recaptured the lead, capping off an eight-play, 82-yard scoring drive with a 6-yard pass from Dylan Ramirez to Braxton Turner with 1:26 left in the game and adding a 2-point conversion. Nick Shippy caught a Ramirez pass that was tipped by Justin Copeland for the successful conversion and a 27-26 Broome lead.

After a penalty on the kickoff against the Centurions for kicking out of bounds, the Red Devils took over at their own 47 yard line and quickly moved to the Broome 2 yard line with 40 seconds remaining. On third and goal with no timeouts left, head coach Corey Fountain opted for the field-goal attempt over what was potentially only one play from scrimmage to score a touchdown.

Clinton’s kicking game has been erratic in the Red Devils’ two games. A high snap and pressure up the middle of the line led to the missed field goal, which followed two missed extra-point tries on the night.

“They did everything we asked them to do,” Fountain said. “This one was on me, and I’ll take it.”

In the end, Clinton was unable to overcome four turnovers – three fumbles lost and an interception. The first fumble was on a play that appeared to be a Shy Kinard 1-yard touchdown run in the opening minute of the second quarter, but the ball popped out and was picked up by a Broome defender and returned to the Centurion 48. On the next play, Ramirez connected with Turner on a 52-yard touchdown strike and a 7-0 lead with 11:01 left in the first half. 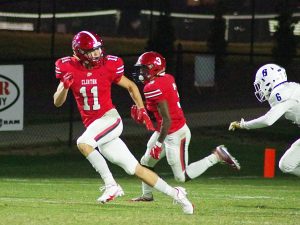 Clinton’s Jykorie Gary (3) gets a block from Wilson Wages (11) on a record-breaking 97-yard touchdown run Friday night against Broome. Gary’s touchdown run is unofficially the longest in school history.

Before the half ended, Jykorie Gary answered back with the Red Devils, scoring on what is unofficially the longest touchdown run in program history – a 97-yard  scamper for a touchdown. That run cut Broome’s lead to 7-6 with 5:04 left in the half after the point-after kick failed.

Gary, who led all rushers with 180 yards on 10 carries, has now scored on plays of 90 yards or more in both games this season. He also scored on a 90-yard kickoff return for a touchdown in last week’s win over Emerald.

Ramirez added touchdown pass to K.J. Morgran to hand Broome a 13-6 lead with 38 seconds to go before halftime. Ramirez completed 21 of 35 passes for 288 yards, three touchdowns and an interception.

The Centurions recaptured the lead, capping a 9-play, 75-yard drive that ended with Morgan’s 12-yard run with 6:40 left in the third quarter and a 19-13 lead after the point-after kick failed.

Clinton answered with a 9-play drive of its own, moving 56 yards for Kinard’s second touchdown – this one coming on a 4-yard run – that tied the game at 19-19 after the kick once again failed.

The Red Devils finally retook the lead following a J.K. Vance interception of a Ramirez pass that set up a 6-play, 65-yard drive. Gary scored from 11 yards out with 4:16 left in the game to put Clinton ahead 26-19.

Clinton plays its first game away from Wilder Stadium next Friday at Chapman.