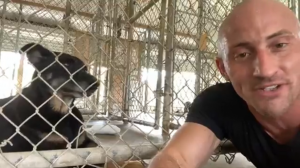 Kris Rotunda of Jordan’s Way Charities streamed live from the Laurens County Animal Shelter this past week, raising nearly $7,000 for the facility.

Rotunda, who founded Jordan’s Way in memory of his own dog, is traveling the country to raise money and awareness for animals that are often mistreated and neglected.

“He picks two shelters in each state and he’s going around trying to help shelters that are in need,” said Sgt. Geoff Brown, supervisor of the Laurens County Animal Shelter.

Rotunda’s efforts, which included Facebook Live streams and a symbolic walk between Laurens and Union carrying chains he said were used in dog fighting rings, raised $6,780 for the Laurens County Animal Shelter. The goal was $6,500.

Brown said all of the money raised goes directly to the shelter.

“The money will go towards animal care, whether that be providing some needs for the facility or equipment that we need,” he said. “It’ll all be designated for dog care.”

Rotunda also urges those watching to consider adopting animals from the shelters he visits, and Brown said several people responded with inquiries about the dogs they saw in Rotunda’s livestreams.

“It raises awareness about the dogs that are here,” Brown said. “We’ve had people from California and Minnesota contact us about adopting dogs, which is absolutely fine.”

Due to COVID-19, the Laurens County Animal Shelter is open by appointment only. Appointments can be made by calling 864-682-4935. Dogs available for adoption can be viewed online at petango.com/laurens.