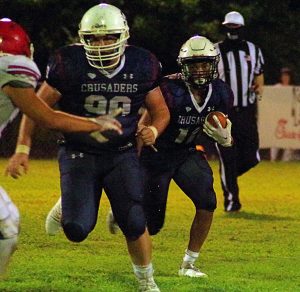 Visiting Holly Hill Academy held Laurens Academy scoreless for the better part of three quarters Friday night in an 18-12 victory at LA’s Todd Kirk Field. It was the season opener for both teams in SCISAA Class A 8-man football and the first game played in Laurens County amid COVID-19 restrictions.

The Raiders (1-0) jumped out to an 8-0 first-quarter lead on a touchdown run from junior Marion Breland followed by a 2-point conversion. LA answered later in the quarter with the first of two touchdown passes on the game from senior quarterback Thomas Lowry to wideout Caio Rita.

The pair also connected on a 32-yard pass in the fourth quarter to cut Holly Hill’s lead to 18-12 with less than three minutes to play.

For complete details, look for the game story in Wednesday’s Laurens County Advertiser.