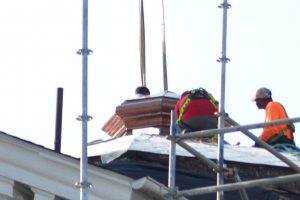 A copper cap is attached to the dome atop the historic Laurens County Courthouse Monday. (Judith Brown photo)

The Historic Laurens County Courthouse is undergoing the first phase of what is hoped to be a multi-million-dollar facelift, and it started earlier this week with a crown jewel that returns the building to a bit of its earlier glory.

Laurens County Public Works Director Dale Satterfield said he told Tim Burdette, project manager for Lloyd Roofing, that he knew recreating the craftsmanship of a copper dome piece from 1911 would be near impossible.

“I think he took that as a challenge,” the new guilded copper cap for the dome was put into place Monday as workers lowered it with a crane onto the courthouse roof. 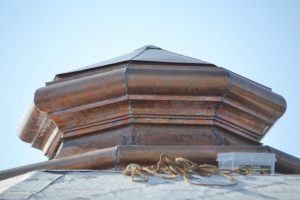 Burdette, who worked on the project with his brother, Tony, said bringing the copper dome back to life would be difficult, but not impossible.

“My brother said, ‘If it’s been done once, we can do it again,’” Tim Burdette said. “And I think it turned out really nice.”

But the copper cap is more than ornamental and historically accurate.

“It had a white mastic covering on it, and what that actually did was cause the dome to slowly deteriorate on the inside because it couldn’t breathe and couldn’t ever dry out,” Satterfield said. “So, they’re creating a copper dome to go mimic the exact architecture and style of the dome that was covered up when all the other work was done in the late 1970s and early 1980s.”

Water damage and leaks are among the necessary repairs being made to the courthouse in the first phase of the project. Phase One was budgeted at around $700,000, which also included a up-to-date smoke and fire alarm, but is coming in under budget at around $460,000.

Lloyd Roofing of Greenwood is doing the work on the copper dome and roof, which Satterfield said needs to be replaced sometime in the near future.

“We’re definitely concerned with that because the roof has reached the end of its life,” he said.

The current shingle roof will be replaced by a metal roof that will also be period appropriate to the early 20th century.

The installation of the fire and smoke alarm system is important for different reasons.

“If the building were to catch fire, probably by the time somebody saw the smoke or suspected something, we would have most likely lost the most treasured building in this county,” Satterfield said.

The second phase on the renovation project is to include more improvements and fixes to the exterior, which has spots of significant rot and water damage.

“That will bring the building back to its original glory and replace all the windows and take them back to something very close to the original architectural style,” Satterfield said.