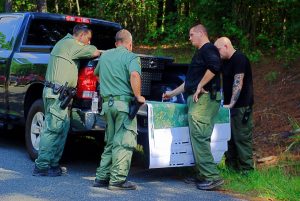 An elderly woman suffering from dementia who went missing Saturday in southeastern Laurens County was found safe a short distance from home after more than eight hours.

Groups of law enforcement officers and first responders from several agencies and volunteers arrived at the Renno Road home of Margaret Williford, 81, and began a search on foot, using ATVs and a helicopter from the State Law Enforcement Division (SLED).

Around 50 people were searching the area around the home, where Williford lives with her daughter, Priscilla Craig and their family.

“I would like to say a special thank you to every single person that prayed, called, shared the picture (on social media) – all the police officers, SLED, the (Department of Natural Resources) and the volunteers,” Craig said. “I just want to thank everybody. It’s unbelievable.”

Williford was discovered missing from the home around 4 a.m. Saturday. A call came over the emergency radios used by searchers at noon, announcing that Williford had been found.

“She’s doing really good,” Craig said of her mother on Monday. “I was just overwhelmed – and I still am – with gratitude.”

Williford was found a few hundred feet from the home on a neighbor’s property where she had apparently been hidden by bushes behind that residence.

The prickly shrubs caused a few cuts and abrasions, but Craig said her mother is doing well. Craig said she was quickly becoming concerned about rising temperatures as afternoon approached Saturday before Williford was found.

The Laurens County Sheriff’s Office, which used its bloodhound team and helped coordinate search efforts, is involved with Project Lifesaver. Project Lifesaver offers a tracking bracelet that is designed for vulnerable people who are at risk of wandering into danger.

Craig said she had no idea that Project Lifesaver, which is free to anyone who needs it, existed, but now Williford has her own bracelet and is registered with the LCSO as part of that program.

The bracelet emits a radio signal that can be tracked by law enforcement using a special device, dramatically cutting down search times.

“We’ve got a bracelet for her now,” Craig said. “It’s something I wish I’d known about.”