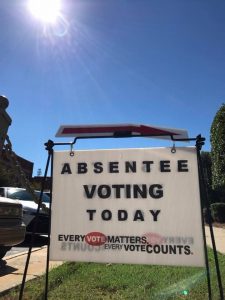 Monday, June 29, for tomorrow’s special election of the  City of Laurens’ District 3 council seat left open after council member Johnny Kelly passed away on April 15.
“That election will be held Tuesday, June 30, at The Ridge in Laurens,” said Lynne West, director of Voter Registration for Laurens County. “Voters in Laurens 3 Precinct make up most of the district, but there are a few eligible voters in Laurens 4 precinct, so all eligible voters will vote at The Ridge.”
David Turner of Deering Street was the only person to file by the May 11 deadline, but in the last month Cassandra Campbell launched a write-in campaign.
Absentee voting takes place in the Historic Courthouse at the office of the Board of Voter Registration and Elections for Laurens County, 200 W Public Square, Laurens.
Because of South Carolina Gov. Henry McMaster’s amendment this spring, all absentee voting ballots requested through the end of June are allowed to include concerns over COVID-19 as a reason for voting absentee.
“That will end July 1,” said Lynne West.
Absentee voting is also ongoing for special elections for Board of Trustee seats for Laurens School District 55, Seat 4, and for Ware Shoals School District 51.
The seat 4 position in District 55 opened when District 4 representative Mark Earle resigned in February after about a year on the board.
Those special elections will be July 14, which was among the many elections postponed because of COVID-19.
Anyone who votes absentee for the school board elections can also claim COVID-19 as a reason, but only through tomorrow, June 30, unless McMaster extends the order.
Posted in News and tagged absentee voting, City Council, City of Laurens, covid-19, District 51, District 55, election, Laurens City Council, Laurens County SC, Laurens District 55, special elections, Vote, Voter Registration and Elections, Ware Shoals District 51