One week after allowing restaurants to reopen for indoor dining, South Carolina Gov. Henry McMaster is completing his mission to reopen the rest of the state’s economy by allowing “close-contact” businesses to reopen.

Those businesses, including barber shops and hair salons, nail salons, massage therapy businesses and tattoo establishments, will be allowed to reopen Monday amidst the COVID-19 pandemic.

“It’s certainly been tough,” said Wayne Neal, owner of Williams Barber Shop in Laurens, who closed his doors as ordered by the state over a month ago. “With no work, it’s put us in a bind. I’ll be glad to get back to work on Monday, I’ll tell you that.”

The statewide total of confirmed COVID-19 cases increased by 147 to 7,927 Tuesday, according to state Department of Health and Environmental Control statistics. Nine additional fatalities in the state were announced, bringing the number of deaths related to the pandemic to 355.

Laurens County had no new confirmed cases and held steady at 48.

Williams Barber Shop has been a fixture in Laurens since 1952. Neal, who works alongside barber Amy Craig, took over as owner in 2017 after the death of former owner James Williams. 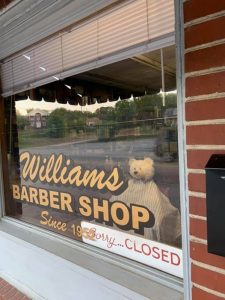 Williams Barber Shop and other close-contact businesses have been closed for more than a month.

Saturday mornings are usually bustling at the barber shop, but Neal, who worked at the shop for 20 years before taking over as owner, said he will keep the number of customers in the shop at one time to a minimum after reopening. He said the governor’s office sent a list of requirements for reopening and cutting down traffic indoors is among them.

“It looks like that’s what we’re going to do,” Neal said. “We’ll wear gloves, masks and use sanitizers and keep everything wiped down after customers.

Neal’s workstation is already about 10 feet from Craig, so “social distancing” in that sense is already in effect, he said.

While restaurants opened for outdoor seating along with takeout and drive-thru services over a week ago, Monday was the first day for indoor dining since the state was locked down on April 6.

Some local restaurants such as Chic-Fil-A and Bojangles in Laurens have opted early on to stick with drive-thru and takeout services, even if they don’t have outdoor seating.

Whiteford’s, which has locations in Clinton and Laurens, opened up their dining rooms Monday.

“We have every other table closed off,” said Whiteford’s owner Ernie Whiteford. “So, nobody will be sitting right behind you. Everybody will be 8-to-10 feet away.”

Whiteford said his restaurants drive-thrus allowed for business to continue over the past few weeks, but he was anxious to fully reopen.

“We’re anxious to get back to normal ourselves,” he said. “We’re glad that they allowed us to do that.”

He said some customers have returned to take advantage of the indoor seating, but he can tell others are taking a slower approach.

“People are tricking in,” he said. “I think some people are still wary about coming in, but we’re excited about the reopening.”

McMaster said the state’s ability for more testing and a tracing program with volunteers to help track the coronavirus helped him make the decision to reopen the state, as neighboring Georgia has already done.

Even so, McMaster said he is confident going forward at a Friday press conference.

“With our increased capacity for testing the people of our state, it is time to responsibly and gradually get these small businesses back up and running,” McMaster said. “We have an opportunity to set an example for the rest of the world by reinvigorating our economy while staying safe, but we can only do that if South Carolinians continue to follow the advice and recommendations of our public health experts.”