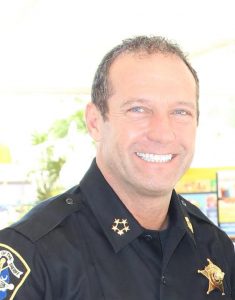 Chastain, who served as sheriff from 2000 until he was defeated in 2016 by current Sheriff Don Reynolds, announced his candidacy for the office in an email Tuesday.

“It takes everyone working together to make the difference, and I have proven I can forge those relationships,” Chastain said. “I look forward to creating partnerships with all law enforcement agencies in Laurens County and beyond. Egos and territorial mindsets must be checked at the door and the citizens of Laurens County must come first when investigating criminal activity. Criminals do not recognize stopping at the city limit sign and law enforcement agencies should be able to have the working relationships to do the same when investigating crimes.”

In his announcement Chastain recounted more than 5,500 drug arrests and the dismantling of 500 meth labs during his tenure. He said the LCSO also seized more than $400,000 and 45 vehicles from drug dealers. He said he wants to see the reimplementation of the Drug Abuse Resistance Education (DARE) program for local students and grow the KidPrint identification program, which recently returned under Reynolds and provides fingerprint and ID cards for children.

Chastain said community relationships was an important part of the job during his 27 years with the LCSO.

“My slogan throughout my law enforcement career has been ‘Building Bridges Between the Community and Law Enforcement,’ and when elected as Laurens County Sheriff that is what I will continue to do,” he said.

Chastain also admitted to having an improper relationship with a female employee while in office. Allison Haley Manley filed a lawsuit against Chastain that was settled in 2012.

Before the 2012 election, Chastain admitted to the affair with Manley that resulted in two pregnancies in a statement posted on social media.

“This event in my life is certainly something that I am not proud of but I accept full responsibility for my actions,” the statement read.

Chastain said the county and LCSO had no part in the affair. He denied forcing Manley to quit her job as she had claimed.

“I want to be sheriff of Laurens County because I believe in what it represents: protecting life and property,” Chastain said. “I’ve enjoyed serving Laurens County and helping people has always been my main concern. As your sheriff, I want our deputies involved in our community and to interact with the citizens, old and young alike.”