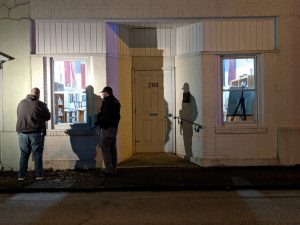 Laurens Police officers Sgt. Ben Gallo and Tyler Smith look for evidence Saturday night at the Laurens County Museum after a break-in on West Laurens Street. (Photo by John Clayton)Shards of glass from a broken window littered the sidewalk in front of the Laurens County Museum on West Laurens Street Saturday night, and a pair of displays from the Revolutionary War were toppled inside following a break-in.

Laurens Police officers responded to the scene of the break-in a little after 8 p.m. Saturday, cordoning off the area in front of the museum.
In addition to a missing donation container that contained an unknown amount of cash, investigators found blood at the scene as the suspect or suspects apparently cut themselves on the broken glass after smashing one of the building’s front windows.
“We believe it was juveniles, and we’re looking at video from around the square in an attempt to identify them,” said Laurens Police Chief Chrissie Lattimore.
Laurens County Museum Association President Carolyn Shortt said only the money in the donation container was taken, and there was no significant damage beyond the window to any of the museum’s property or artifacts.
“We always try to be well prepared for things that could happen but that was a surprise,” Shortt said. “We’re aware that kind of thing happens – breaking in the front window and knowing that someone else has a different interest in the museum. We didn’t want to ever create a situation that would draw that sort of attention, so it was heartbreaking that this happened.”
Shortt said although an activated burglar alarm seems to have rushed the suspects from the building, museum association leaders are looking at security for the West Laurens Street building. 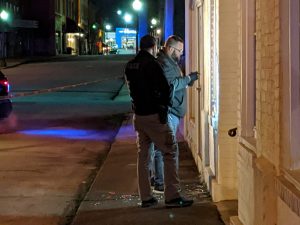 “We have the opportunity to re-examine the security system for that particular building,” she said. “Thankfully, we have persons … on our board who knew exactly what to do and the protocols to follow.”
The West Laurens Street property still houses a large portion of the museum’s collection, despite its impending move to the Witherspoon Building on the Laurens Historic Square. The museum association has some artifacts at that location and currently hosts lectures and other events there.
“We have always been concerned about safety and security,” Shortt said. “It’s not just an issue because we got broken into. It’s always been a concern for our buildings and overall by our board and executive committee.”
Posted in News