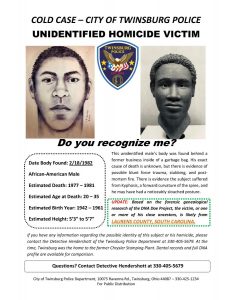 A 38-year-old Ohio cold case may have connections to Laurens County and police in Twinsburg, Ohio are seeking help in solving the “John Doe” mystery.

According to a release from the Twinsburg Police Department shared by the Laurens County Sheriff’s Office, the body of an African-American male was found on Feb. 18, 1982, and his remains have never been identified.

According to research from the DNA Doe Project, which provides forensic genealogical research assistance in such cases, “the victim or one or more of his close ancestors is likely from Laurens County.”

The unknown man was between the ages of 20-35 at the time of his death, which occurred sometime between 1977-81. Police have ruled the cause of death as a homicide.

The victim was between 5-foot-3 inches tall and 5-7. Forensic evidence also suggests that he suffered from Kyphosis, a forward curvature of the spine and may have had a “noticeably slouched posture.”

The victim’s body was discovered behind a former business inside of a garbage bag. No cause of death has been determined, but there is evidence of possible blunt-force trauma, stabbing and post-mortem fire, according to police.

From 1957 until 2010, Twinsburg was home to the former Chrysler Stamping Plant, which once processed more than 26,00 tons of steel per month.

Dental and a full DNA profile are available by comparison.

Anyone with information on the case is asked to call Twinsburg Police Detective Eric Hendershott at 330-405-5679.