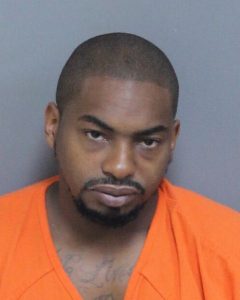 “I am grateful that no one was injured during the apprehension of this dangerous individual. It is unfortunate that Mr. Evans so callously took the life of another,” said Laurens County Sheriff Don Reynolds. “We have reason to believe Mr. Evans had a gang affiliation and this shows the utter disregard these gangs have for human life. Our investigators worked tirelessly on this case and I greatly appreciate the assistance of other agencies involved in capturing Mr. Evans. I hope that the Walker family can breathe knowing that he is behind bars tonight.”

Earlier, the LCSO and CrimeStoppers had asked for the public’s help in locating Evans, who is expected to be charged in connection with the murder of Rasham Walker in the early morning hours of Jan. 23 at a Walker Avenue residence.

The LCSO arrested Brandy Standridge, 32, of Iva, and charged her with murder and armed robbery on Feb. 1 in connection with Walker’s death. Standridge remained in the Johnson Detention Center Tuesday afternoon.

Walker’s death was the first reported murder in Laurens County in 2020 and the first of two homicides in two days.