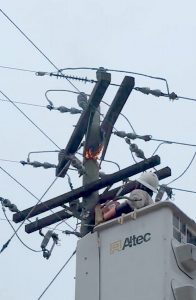 The incident began when CPW was contacted by Laurens County Dispatch about a fire high up utility pole on Church Street Monday night.
“Someone had reported that a utility pole was on fire on Church Street, and the fire department was concerned that the electric provider needed to be contacted,” said CPW General Manager John Young on Tuesday morning.
When the CPW crew arrived, it was determined to be a Duke Energy utility pole, and a crew member used a fire extinguisher safe for electrical fires. Laurens CPW Electric Division Superintendent Robby Howard then contacted Duke Energy about the incident.
Pike Electric, which contracts with Duke to provide power transmission services, called and informed Howard that they were coming to change the pole, but in the meantime it caught fire again Tuesday morning and CPW crews put out the second fire.
By Tuesday afternoon, CPW crews were back putting out another fire at pole.
There must have been fire still smoldering inside the wood, Young said, because before Duke Energy was able to begin work on replacing the pole, another fire was reported, which was again extinguished by CPW crews.
“We also have a primary line nearby and as a safety precaution, we needed to adjust our circuit,” Howard said, which required CPW to shut down power to about 75 customers for a couple of hours in the Lakeview Drive and Lynn Avenue area of the city.
“The Duke pole and line in question is beyond a Laurens CPW line on Church Street north of Fullbright Road,” Young said. “Robby Howard chose to err on the side of caution for Duke employees and his line workers.”
Posted in News and tagged CPW, Duke Energy, electrical outage, Laurens Commission of Public Works, Laurens County SC, Laurens SC, utility poles