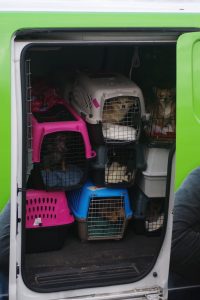 Dogs are packed into carriers and ready to travel with the Charleston Animal Society Wednesday afternoon after a puppy mill in rural Ware Shoals was shut down. (Photo by John Clayton)

Two people have been arrested on charges of animal cruelty by the Laurens County Sheriff’s Office after a puppy mill was shut down Wednesday on Indian Mound Road in rural Ware Shoals.

A puppy in poor health purchased from the suspects led to the investigation that began Tuesday and concluded with the last animals being seized by Laurens County Animal Control around 4 p.m. Tuesday.

A mother and her adult son were arrested and booked into the Johnson Detention Center Tuesday. Barry Davis, 46, and Barbara Anne Timms, 70, of Indian Mound Road in Ware Shoals have been charged with ill treatment of animals.

In addition to the LCAC, representatives from Anderson County PAWS, the Charleston Animal Society and Izzie’s Pond, an animal sanctuary and rescue in Liberty, also took in scores of animals. 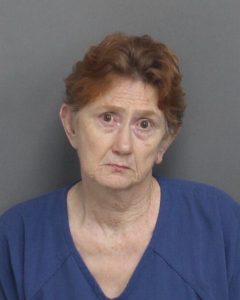 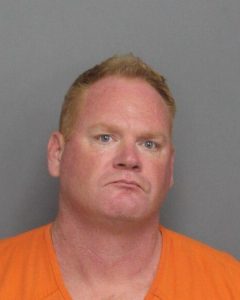