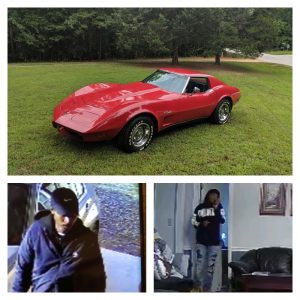 The 1976 Chevy Corvette purchased with a counterfeit check and the two suspects.

Investigators from the Laurens County Sheriff’s Office are attempting to locate a missing car and two suspects accused of fraudulently obtaining the 1976 Chevy Corvette from a seller in Honea Path.

According to the LCSO, two black males driving a maroon sedan took the red Corvette on Jan. 1 around 4 p.m. after using a counterfeit method of payment to purchase the vehicle.

Anyone with information on the whereabouts of the vehicle or the two suspects are asked to contact the LCSO through CrimeStoppers at 864-68-CRIME or at 864-984-2523.

Arrests made after shooting 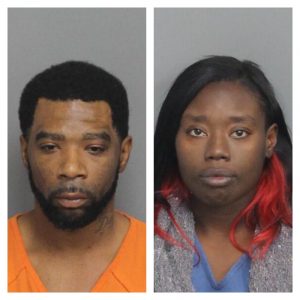 A shooting in the early morning hours Monday led to the arrests of two people by the Clinton Police Department and Laurens County Sheriff’s Office in Clinton.

Edna Victoria Foster, 31, of Clinton was also arrested and charged with accessory after the fact of a felony for allegedly helping Hill escape.

According to reports, Hill and Foster fled the scene of the incident in a Dodge Charger and were later located by a deputy from the LCSO. Deputies turned the suspects over to Clinton police.

The victim was reportedly wounded in the upper leg after being shot on Florence Street in Clinton.

Both Hill and Foster remained in the Johnson Detention Center Tuesday.

The Clinton Fire Department took about a minute to respond to a house fire on Elizabeth Street in Clinton Monday morning.

Smoke was emerging from the home as firefighters arrived at 10:24 a.m.

No one was injured in the fire, and it was extinguished quickly. Despite some damage from fire, smoke and water, the home is salvageable, according to reports.

The fire was ignited after furniture was placed too close to a gas heater in the residence, reports said.