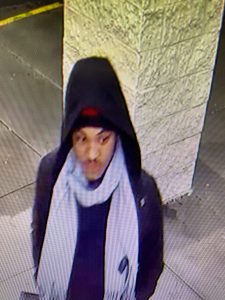 The LCSO is seeking this man in connection with an armed robbery at a Laurens Dollar General Tuesday night on Highway 221 North.

The Laurens County Sheriff’s Office is searching for a suspect wanted for robbing the Dollar General on Highway 221 North in Laurens around 10 o’clock Tuesday night.

The suspect was armed with a firearm and appeared to leave the store on foot “with a substantial amount of money,” according to a release from the LCSO.
The suspect is apparently also being sought by the Hampton Police Department for committing an armed robbery at a Dollar General there at about the same time Monday night. He also fled with an unspecified amount of money from that store.
The LCSO said deputies used K9 units in an attempt to locate the suspect but were unable to do so.
The suspect is described as a light-skinned black male, approximately 6-feet tall by the Hampton Police Department.
The public is being asked for its help in locating or identifying the suspect. Anyone with information can call CrimeStoppers anonymously at 864-68-CRIME or Laurens County dispatch at 864-984-2523.
Posted in News