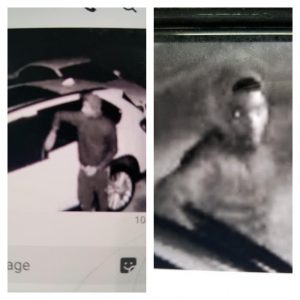 Several cars were broken into early Monday morning in the Lakeside Country Club community off of Highway 76 in Laurens, and the Laurens County Sheriff’s Office is seeking the public’s help in identifying a suspect.

The suspect was caught on security cameras during commission of the crime. Investigators said they are currently seeking only one suspect.

The LCSO said the break-ins occurred around 3 a.m. Monday and the suspect remained at large Tuesday afternoon.

According to the LCSO, three vehicles were broken into and several items were taken. The stolen items included a laptop, a briefcase and clothing.

The suspect appears to be a young black male.

“We are asking for the public’s assistance in obtaining information related to these break-ins,” a release from the LCSO read.

Anyone with information on the identity of the suspect is asked to call Laurens County CrimeStoppers at 864-68-CRIME or the non-emergency LCSO number at 864-984-2523.