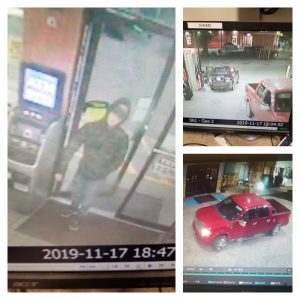 Surveillance footage of suspects involved in a car theft and kidnapping at the Pilot travel center Sunday night in Clinton.

According to the Clinton Police Department, a black 2008 Ford Fusion was stolen from the Pilot travel center at Highway 56 North and I-26. When the car was taken, a 1-year-old child was inside the vehicle.

Clinton Police Chief Sonny Ledda said the child was found soon after the theft at the Hardee’s restaurant a short distance away on Highway 56.

The suspects, however, are still at large.

“We’re still working the case,” Ledda said. “We have a couple of leads. I’m just glad the child was not harmed in any way.”

At least two persons of interest are being sought by the Clinton police in relation to the auto theft and related kidnapping charges.

At least one suspect, apparently a white male, was caught on surveillance cameras at the Pilot travel center.

The suspects were driving a red Ford F150 pickup truck.

Anyone with information as to the identity of the suspects, their whereabouts or the whereabouts of the stolen vehicle are asked to contact the Clinton Police Department.