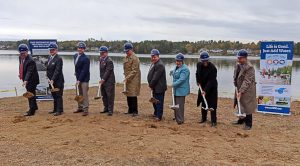 The Laurens County Water and Sewer Commission ceremonially broke ground Thursday on a project nearly 50 years in the making.

LCWSC Executive Director Jeff Field said the inspiration for the project came from the leaders of the Rabon Creek Water District, the predecessor of the LCWSC. A total of $5.8 million in funding from the U.S. Department of Agriculture the LCWSC accepted in August provided the money needed for the $50 million project.

“This is a project that will allow our county to better meet the needs of a growing population,” said Field. “They’re expecting 220,000 more people in the Upstate in the next 20 years. It’s a project that will encourage and support more jobs for our community and a product tht will provide high quality and sustainable water for generations to come.”

The water treatment facility will draw from Lake Greenwood and supply water to both Laurens and Greenwood counties. It will initially be able to treat 4,000,000 gallons of water per day, but that capacity can be immediately increased to 6,000,000 gallons daily and then increased exponentially from that level through expansion. The project also includes 30 miles of water lines and a 500,000-gallon water tank on Highway 72 in Laurens County. 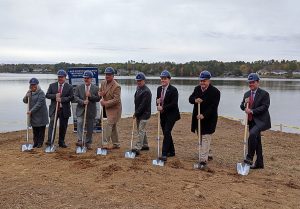 Construction on the project is expected to be completed in about 2.5 years.

County leaders are hoping the new facility will allow for infrastructure and development in the Lake Greenwood area along the Laurens County shoreline.

Members of the LCWSC Board of Trustees, staff and local dignitaries took turns with shovels along the Lake Greenwood shore near Camp Fellowship during Thursday’s groundbreaking ceremonies, which was a celebration of the long-awaited project.

“When the board voted to move forward with this very large and important project, we knew it was going to be doing so with the help and support of all those who had served before us,” said LCWSC Board Chairman Ted Davenport. “A project of this significance didn’t develop over one year or over 10 years, but over many years. Board members and general managers of both the Rabon Creek Water District and the Laurens County Water Resource Commission are all part of this ceremony, and we thank you for what you did in making this and allowing us to do this.”

Davenport said while the Saluda and Reedy rivers are important resources for the area, only Lake Greenwood has the ability to sustain the area’s needs for expected growth in the future.

Brown lauded the project for both counties.

“It’s more than a series of pipelines. It’s more than a treatment facility,” Brown said. “In a broader context, I see this as an important part of the greater effort to serve Laurens County communities through infrastructure investment and as a major step in stimulating the next level of economic development in Laurens County.”