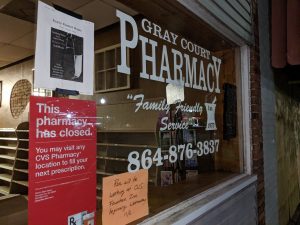 The Gray Court Pharmacy closed abruptly on Nov. 6 after 42 years in business. (Photo by John Clayton)

The Town of Gray Court could soon be out of the water business – at least for a while.

The town council voted unanimously to allow Mayor Stellartean Jones to sign a proposed six-year agreement that would transfer the town’s water operations to the Laurens County Water and Sewer Authority.

The agreement is pending final approval from the LCWSC’s Board of Trustees and its next regular meeting at the end of November.

“We’re both going into it with the right attitude, and I think it’s a win-win for both of us,” said LCWSC Executive Director Jeff Field. “I think it’s a plan that we will be able to get done.”

The agreement would also provide Gray Court customers with 350 new water meters, replacing all of the meters currently online in Gray Court, some of which are aging. The new meters can also be read remotely, alleviating the need for meter readers on a regular basis, Field said.

The cost of replacing the meters currently in service is estimated at $150,000, which would be paid back to the LCWSC through water billing at $25,000 annually over the lifetime of the contract. The six-year deal includes a three-year initial agreement coupled with a three-year option for renewal.

“It will be different and something to adjust to, but I think once the citizens get into it more they’ll realize it’s a different agreement,” said Gray Court Mayor Stellartean Jones.

Customers will still be able to pay their bills at the Gray Court municipal offices, but will also be able to pay online and by credit card through the LCWSC’s system.

Field said when introducing the plan in October that Gray Court billing will go up an average of $1.81 as they will be asked to pay LCWSC rates.

Field said the agreement is a natural fit for the LCWSC and for the town.

“We already sell them water at wholesale and they’re in the center of our service area,” he said.

Jones said she believes the agreement will be good for the town, but did not say Gray Court is out of the water business for good.

“I think it’s going to be a good thing for now,” she said.

Two local developers are in negotiations with the town to purchase less than an acre of land connected to a parcel they already own in downtown Gray Court near Highway 101.

Developers Bill Smith and Jesse Ireland discussed their plans for the properties, which they said could bring multi-purpose shopping plaza and more to the town.

“We want stable-type businesses to come,” Ireland said. “Separately, (the properties) aren’t worth anything, but together it could be the beginning of something. If we can get a stable business in there – a national chain or something like that, everything will follow that.”

The developers are to meet with Town Manager Garry Smith and legal representation to attempt to work out an agreement on the town-owned property.

The Gray Court Pharmacy, which had served local residents since 1977, closed on Nov. 6 when its owner/pharmacist took a job in Fountain Inn with the a chain store.

Jones said losing the downtown store was a blow for residents and the town.

“A lot of seniors used that drugstore,” she said. “We want more businesses here, and it hurts to lose one.”

Laurens County Animal Control is seeking a new contract with the town. LCAC Supervisor Geoff Brown said the contract between his agency and the town had not been changed or renegotiated in several years.

Brown said the LCAC has taken in 109 dogs from Gray Court alone this year. It has taken in more than 1,000 countywide.