But Clemson fans need not fear, The Tiger will definitely be in attendance, representing the defending NCAA FBS National Champions. The Tiger will be among some 600 local football fans and supporters sporting team colors as well as appetites for oysters and Lowcountry boil.

The annual event will be held at 291 Professional Park Road near the Laurens County Chamber Offices.

In addition to The Tiger, the event will welcome mascots Cocky from South Carolina and Scotty from Presbyterian College along with the PC cheerleaders. 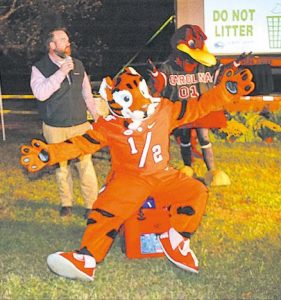 Munyan said it takes about 50 vounteers, including 16 members of the PC baseball team, to make the event happen each year. The Blue Hose baseball team helps get buckets of oysters from the fire to the tables.

“The volunteers all play such crucial role in participating and making the event happen,” Munyan said.

In addition to the oysters, the event also features a Lowcountry boil and a silent auction.

The silent auction will feature a helmet from Clemson signed by head coach Dabo Swinney and a Gamecock helmet signed by former South Carolina teammates Marcus Lattimore and Connor Shaw. A kayak donated by Prisma Health is also among the items that will be up for bid.

WYFF meteorologist Chris Justice will also be broadcasting from the event.

Munyan said volunteers are to begin serving food at 5:30 p.m., about 30 minutes earlier than usual to give more time for the attendees to be served.

A team of volunteers from Firmin Ford will handle a lot of the cooking and other tasks along with a cadre of volunteers who began working on site preparations Tuesday.

“Our main focus is our local teams, but we have fans of LSU, Georgia and everywhere come out,” Munyan said.