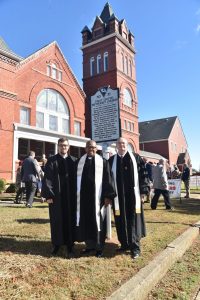 “We were very humbled,” First United Methodist Church Pastor Daniel Eplee said. “We know for sure that we stand on the promises and the work of the saints who have come before us. We stand on their shoulders.”

Descendents of the church’s original 15 founders were among those in attendance Sunday.

Eplee said Elizabeth Word and her daughter, Sarah, are the only identified original founders, and several of their descendants made the drive to Laurens for the celebration.

Susan Whatley, a descendent of the Words, and husband Ronnie of Senoia, Georgia attended the event as did descendant Chad Word and his son, Levi.

“We had all kinds of former members of the church who were able to be there,” Eplee said. “But one of the most unique and special parts about it was to have the descendants of Elizabeth Word, who was the mother of the church.”

The church has grown to some 430 members since its birth in 1819, and Eplee said it continues its mission and ministry in the 21st century.

“One of the goals of our ministry is to take care of our community through our food bank, which is open on Tuesdays and Thursdays, and through our partners at Straight Street and LIFE (Living It Free Everyday), and we’ve got other ministries that we do here at the church.

“We’re thankful to God for all that we’re doing today.”