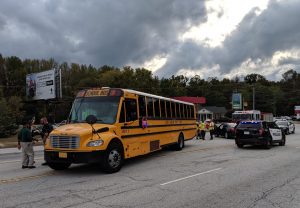 A Laurens County District 55 bus was involved in a collision Monday afternoon on Hillcrest Drive. No students were injured, and the driver of the other vehicle was ruled at fault. (Photo by John Clayton)

Two people were taken to the hospital Monday evening after a car collided with a school bus on Hillcrest Drive in Laurens.

According to the Laurens Police Department, the two occupants of the vehicle suffered minor injuries and were transported to the hospital for evaluation.

Laurens School District 55 spokesman Ed Murray said none of the 14 students on the school bus were injured.

The driver of the vehicle, a black sedan, was ruled at fault in the accident.