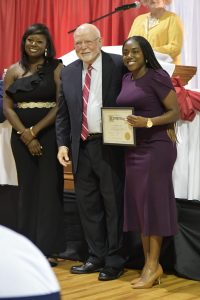 The dinner was presented by the Laurens County Democratic Party. This year’s theme was “Women in Politics” and featured Atlanta Mayor Keisha Lance Bottoms and Bryanta “Bre” Booker-Maxwell, a Laurens native and political director for Jaime Harrison’s 2020 U.S. Senate campaign, as guest speakers.

Organizer Alicia Sullivan said about 135 people attended the dinner, which also honored the public service of the county’s distaff leaders, current and past.

They were honored along with local municipal councilwomen, including Gray Court’s Shaterica Neal, Laurens’ Marian Miller and Clinton’s Shirley Jenkins and Sara Latimer.

Anderson was the first African American woman to serve on county council, and Neal is the youngest elected official in Laurens County.

Her award was accepted by her granddaughter, Katie Moore Smith.

“The most memorable moment for me was when Mary Moore’s granddaughter accepted recognition on her grandmother’s behalf,” Sullivan said. “She was so proud and was emotionally moved. At that moment, I knew our program had more meaning than just empowering women. It was also about respecting the hard work that has been accomplished by so many women we have forgotten.”