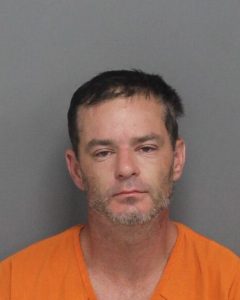 A Woodruff man sought by the Laurens County Sheriff’s Office for a Sept. 11 burglary of the Youngs Fire Department was arrested Friday night.

Terry Irwin, 40, remained in the Johnson Detention Center Tuesday morning. He is charged with second-degree burglary and grand larceny with a value of $10,000 or more after allegedly breaking into the all-volunteer Youngs Fire Department and stealing equipment.

According to the LCSO, Irwin was taken into custody at his home in Woodruff without incident around 9:30 p.m. Friday. Information investigators received while looking into an unrelated case led to his arrest, said LCSO Public Information Office Courtney Snow.

The LCSO shared still photos from the fire department’s security cameras on social media to help identify the suspect.

“Deputies and investigators have worked tirelessly to bring justice to the Youngs Fire Department,” said Laurens County Sheriff Don Reynolds. “This was a despicable act, and we will investigate the incident to the fullest extent.”