A West Main Street, Laurens, couple was awakened early Saturday morning when the driver of a stolen vehicle crashed through a wall and into their swimming pool. 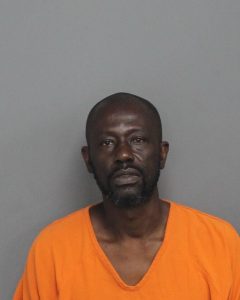 Patrick Anderson was arrested and remained in the Johnson Detention Center Tuesday on charges of reckless driving, resisting arrest and possession of a stolen vehicle.

“It was a stolen vehicle from outside the county and we always get a BOLO (be on the lookout) through central dispatch,” said Laurens Police Chief Chrissie Cofield. “There was not a chase because officer VanPelt was driving on West Main Street and spotted the vehicle and turned around, and as soon as the driver saw the car he accelerated and quickly lost control of the car.”

The car, which was heading West on West Main, sped across the front yard of Jim and Ashley Todd’s home and entered Academy Street at a high speed, circling back and crashing through their property wall and ending up inside the pool.

“It was about 6:45 when we heard it when it went through the wall and Jim looked out and said, ‘There’s a car in our pool!’” said Ashley Todd. “We came out to see if anyone was hurt and he was kicking the back window out of the car and he jumped over both fences and ran next door.”

With the close proximity to the Laurens Police Department, the officer was immediately joined by the other officers from the shift, Cofield said, and Anderson, 48, was apprehended in the yard next door. The Laurens Fire Department also responded. 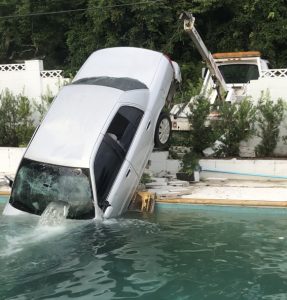 A wrecker pulls the allegedly stolen Ford sedan out of the pool at the residence of Jim and Ashley Todd in Laurens.

“He’s been charged with reckless driving, resisting arrest and more charges will likely follow,” Cofield said. The car theft charges would be filed where that occurred. The Todds said they were told the vehicle, a silver Ford Crown Victoria sedan, was stolen in Asheville, North Carolina.

According to the LPD report, Anderson told officers that he had been to a strip club and “smoking crack.”

The car was removed from the pool just after 8 a.m. Saturday.

The pool contained pieces of the wall, broken glass from the front and back windshields, the pool’s filtration system, pieces of the driver’s tennis shoe and a sheen of oil and gas over the surface of the water.

“We’re glad no one was hurt,” Todd said. “But the pool’s closed for the season.”