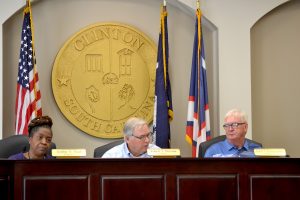 The City of Clinton is one of four Upstate electric providers named in a lawsuit which claims that potential votes for a planned rate adjustment were negotiated in a “vote buying scheme” among four of the 10 municipal electric provider members who make up Piedmont Municipal Power Agency (PMPA).

The City of Clinton and Laurens Commission of Public Works are among 10 cities that make up the PMPA, which was formed in the late 1970s during the nation’s energy crisis as a way for small cities to gain more control over the power they provided their customers. PMPA owns 25% of Unit 2 at the Catawba Nuclear Station on

Lake Wylie, near Charlotte, and each city initially selected a share of the percentage to pay for each month.

The 10-member PMPA Board of Directors is made up of one voting director from each city and an alternate director who can vote in the absence of the director. Clinton Mayor Bob McLean serves as the city’s primary director on the board while City Manager Bill Ed Cannon is the alternate director.

Now a lawsuit has been brought by some PMPA members against other members, including the City of Clinton.

On Monday morning, Clinton City Council held a special called meeting and spent an hour in executive session working to procure a litigation attorney to defend the city in the legal case.

McLean told media after the meeting that council met with a prospective litigation firm member during executive session and there was also a planned conference call later Monday morning.

“The first I heard about it was a week ago Friday. We received an email and since it’s now in litigation, it’s up to the attorneys,” McLean said after the conclusion of the special meeting.

He added that obtaining litigation attorneys was proving complicated.

“You have to get new guys and that’s what we are doing. We are in that process,” he said.

PMPA was also named as a defendant in the case and, in addition to Clinton, the other cities or electric providers named in the suit include Rock Hill, Greer Commission of Public Works and the City of Union.

The plaintiffs who brought the lawsuit are also PMPA members – the  Laurens Commission of Public Works, the City of Newberry, Gaffney Board of Public Works and Easley Combined Utilities.

Filed in Newberry County’s Court of Common Pleas on June 13, the lawsuit claims, among other things, that “Rock Hill and Greer have conspired with each other, and other members of PMPA, in a scheme to enter ‘side agreements’ or ‘side deals’ to effectively buy votes from other Board Members,” and that “Defendants the City of Rock Hill and Greer were well aware that the benefit they would receive would be to the detriment of the Plaintiffs.”

Documents included a March 20, 2019, letter sent by Rock Hill and Greer’s attorneys, Spencer & Spencer, to PMPA director Coleman Smoak and its chairman, Joel Ledbetter, claiming the agency had participated in cost shifting for several decades and threatening a lawsuit.

The accusation refers to agreements made in past decades by the fast growing, larger cities of Rock Hill and Greer, which have continued to help support PMPA by taking some of the load share from the smaller cities which were losing electric customers and struggling to cover their required load share payments.

Documents from the South Carolina Judiciary public files include the lawsuit filed June 13 and affidavits filed June 17. In affidavits by Ledbetter and legal expert witness Gregory B. Adams, the two larger cities entered into unlawful agreements on May 8, 2019, with Union and Clinton to convince them that if Rock Hill and Greer could be assured of their votes, the larger cities would supplement Clinton and Union financially over the next 10 years.

The suit claims that all the smaller  “oppressed members” who make up PMPA would be faced with much higher rates if Rock Hill and Greer’s rate methodology plan was put into action. PMPA members Abbeville and Westminster are the only two electric provider members not mentioned in the suit, either as plaintiffs or as defendants.

“Evidence I have reviewed shows that these illegal contracts were entered into for the purpose of compelling the Directors appointed by and representing Union and Clinton to vote as desired by Rock Hill and Greer at the June 20, 2019, Board of Directors meeting,” Adams said. “The votes of these Directors have been unlawfully purchased by Rock Hill and Greer promising to pay Union and Clinton millions of dollars over the next decade.”

Ledbetter said he learned of the May 8 meeting through conversations with Union director Joe Nichols, and Ledbetter said that the discussions and negotiations are “outside of the normal PMPA Board of Director’s decision-making process.”

Ledbetter’s affidavit, dated June 14, said Rock Hill planned to present a new rate methodology plan at the June 20 board meeting, and Nichols said “the model showed that Clinton and Union would pay more to PMPA for its power and energy than current levels while Rock Hill and Greer would pay less,” Ledbetter said. “Mr. Nichols informed me that representatives of Greer and Rock Hill told him that they would be willing to ‘help’ Union and Clinton relieve some of their financial burden from the time of model implementation to the year 2028.”