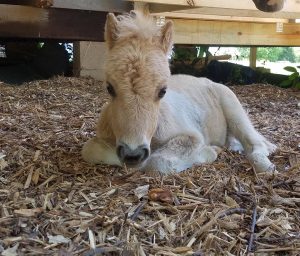 The remains of a miniature pony that disappeared from a Fountain Inn farm around 10 days ago have been found.

“Pikachu,” a two-month-old filly, disappeared from Hidden Pasture Farms, and owner Kate Nichols had offered a reward for her safe return, but NetPosse.com announced Thursday morning on its Facebook page that the miniature horse was found dead.

“We have received sad news this morning,” the post read. “Pikachu was found last night. Unfortunately, it was not the news we wanted to hear. She was found deceased. RIP little one.”

According to the Laurens County Sheriff’s Office, the horse was found in a barn at Hidden Pasture Farms where a bail of hay apparently fell on her.

Initial searches of the area surrounding the farm turned up no trace of the horse or of a potential attack by predators, leading Nichols to believe the horse had been stolen.

She offered a reward of $1,250 for the safe return of the horse.

“We appreciate everyone’s help in searching, spreading the word and following up on leads. Words can’t express how thankful Pikachu’s owner is in all the help from the community and our followers,” the NetPosse.com post concluded.