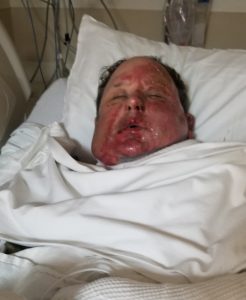 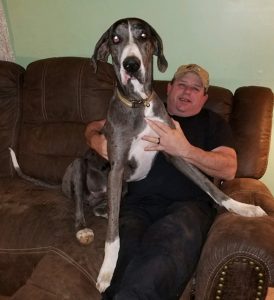 A Laurens County Sheriff’s Deputy that was severely burned when his car engine burst into flames was back in surgery Thursday afternoon at the Jason M. Still Burn Center in Augusta, Georgia.

Deputy Ralph Braswell suffered burns over 44% of his body, including his face, torso, head and hands. An elevated heart rate and high temperature caused by deep, third-degree burns forced his return to Augusta’s burn center. He also has severe second-degree burns.

“We noticed it (Wednesday) when his face started to swell,” said Darlene Braswell, Ralph Braswell’s wife of 10 years. An infection from the more serious burns caused the swelling and increased body temperature.

The deputy was taken to Laurens Memorial Hospital around 3 a.m. Wednesday and then transported back to the JMS Burn Center.

Ralph Braswell, 55, has been with the LCSO for about a year, joining the agency after a long career in farming.

“Right now, my main focus is getting him taken care of,” Darlene Braswell said of her husband. “I’m trying to keep everything together.”

The Braswells credit the quick actions of their adopted daughter, Summer Howard Braswell, 16, for helping to save her father immediately after the engine explosion. His personal vehicle had stalled and he was under the hood, attempting to fix the problem when the engine ignited.

The family, which also includes another adopted daughter, Arianna, 12, is faced with another stay in Augusta and other medical expenses.

A fund has been set up locally at SunTrust to help with necessities for the family, and donations can be made there in Ralph Braswell’s name. Donations may be made online at givesendgo.com.

Darlene Braswell said she is thankful for help from friends and neighbor who have already pitched in, including Pet Commander Boarding in Greenpond for taking in the family’s “tea cup” Great Dane, Nugget. She said the owners at Pelican SnoBalls has also allowed Summer to take needed time off to be with her family.

This is the second fire-related incident to impact the LCSO in as many weeks. This past week, LCSO Deputy Adam Teseniar and his family seven-member family lost their home in a house fire in Newberry County.