A Laurens County woman accused of having a sexual relationship with a teenage boy accepted a plea agreement and pleaded guilty Monday in 8th Circuit General Sessions Court. 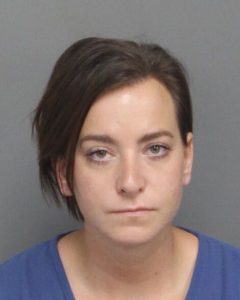 Chasity Creasy Sherfield, 26, pleaded guilty to first-degree assault and battery and was sentenced to four years in prison by Judge Allison Renee Lee.

Under the plea agreement, Sherfield is to have no contact with the victim, a male teen under the age of 16, per a restraining order. She will not have to register as a sex offender.

Sherfield was arrested by investigators from the Laurens County Sheriff’s Office on Sept. 11, 2018 after the victim’s parents reported their son as a runaway.

After locating the victim, the investigators discovered Sherfield engaged in sexual acts with the victim between Aug. 25 and Sept. 10, 2018. She was initially charged with three counts of second-degree criminal sexual conduct with a minor and three counts of contributing to the delinquency of a minor.

She was released from the Johnson Detention Center on $10,000 surety bond on Sept. 11, the same day she was initially arrested.

A motion to revoke Sherfield’s bond was heard on April 10. Under provisions set forth by her bond, Sherfield was to have no contact with the victim – direct or indirect. She was also required to wear an electronic monitoring device, but she allegedly contacted the victim.

According to jail records, she was booked back into the Johnson Detention Center on April 25, where she remained until her case came before the court.

“In the face of dynamics which made this case difficult to prosecute, I am pleased that our team was able to ensure that Chasity Sherfield received an active prison sentence and is being held accountable for her actions,” said 8th Circuit Solicitor David Stumbo.