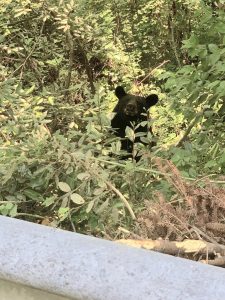 Clinton, South Carolina – Sightings of a black bear in Clinton neighborhoods throughout the day and Sunday evening had Department of Natural Resources officers busy and Clinton residents driving around looking for the large animal, which was north of Clinton High School when officers last saw it Sunday night before dark.

In case the bear returns, however, DNR officers are asking for help to try and prevent further interaction with humans in the area, particularly by not going out to look for the bear if it’s spotted again.

“Public safety is our first concern, and the second concern is the safety of the bear,” said Mark Carroll, wildlife biologist with Region 1, Unit C, South Carolina DNR. Administering drugs to try and physically remove the bear can complicate matters, he added. “We ask that you don’t go out looking for it, but just carry on with your day as usual.”

The northwestern and coastal areas of South Carolina are among the natural habitat ranges for black bears. 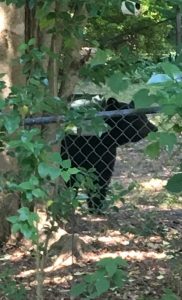 “We have bears coming through this time of year. They are breeding and there’s a lot of stuff ripening up so they can get seeds and berries,” Carroll said. “But if they can find bird food and dog food and trash they’ll eat that instead, and then if they become habituated to that they can stay around neighborhoods and become a nuisance. We want to avoid that because if we get into a tight situation sometimes we have to administer drugs and it’s really tough on the bear especially in this heat, and sometimes in rare cases we have to euthanize them. We don’t want to do that.” 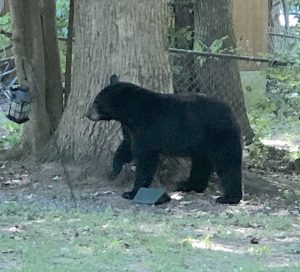 Carroll said the bear had been sighted Saturday night around I-26 and I-385, and he felt it was likely the same bear that was at Davidson Street area in Clinton Sunday because bears can travel a significant distance in a day. At 7:30 Sunday morning, Caldwell Street resident Jimmy Tate spotted the bear on the other side of Davidson Street.

“I’ve lived here my whole life and spent hundreds and hundreds of days in the mountains and have never seen one, and here it was in my neighbor’s yard,” Tate said. “And I’ve explained to people that this was not a small bear. It’s a large bear.”

Then about 3 p.m. Davidson Street resident Luanne Summers was on the sidewalk and saw the bear getting into her neighbor’s trash receptacle which was parked up at the sidewalk, and Summers quickly called 911. A short while later it was back across Davidson Street and was spotted eating bird seed from feeders at a Caldwell Street home before moving back through the dense woods which surround the creek.

About 7:30 p.m. Sunday, another call came in and the bear was farther out of town on Gaywood Avenue, located in a neighborhood off U.S. Hwy. 72 across from Clinton High School. It was again attempting to empty a bird feeder, but by the time DNR officials returned, the bear was again heading farther away from town.

“It was in a field north of there but it kept moving,” Carroll said. “The bear decided to cover some ground and was doing it in a hurry.” 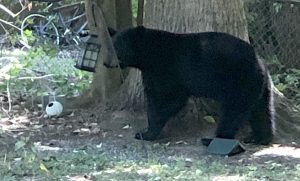 Carroll said if people hear about bear sightings, he first asks that residents stay away from the area rather that trying to find the bear. Then he recommends taking down bird feeders, and limit the amount of time animal food or trash is out in the open.

“It doesn’t hurt to keep attractors away for a week or so when there is a bear sighting,” Carroll said, adding that the bear should move on sooner without the opportunities for easy food sources, adding that if they are not threatened, the bears are typically timid and not dangerous unless provoked. “Pets usually aren’t in danger, especially cats because they can usually evade a bear easily. Bears usually aren’t interested in small animals anyway.”

Carroll said there is a great deal of information on the DNR website. It can be found at http://www.dnr.sc.gov and search for information about the Black Bear species.