Well after sunrise on Thursday morning, visitors to the Prisma Health Laurens County Memorial Hospital’s Emergency Department were being scanned by an officer with a hand-held metal detector wand after an early morning altercation just before 2 a.m. resulted in injuries to an armed visitor and a Greenville Health Authority officer. 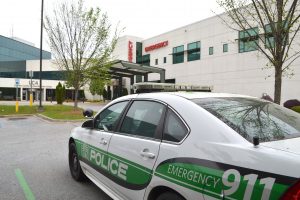 Photo by Judith Brown
‘ARMED VISITOR’ – A Greenville Health Authority Police officer was shot just before 2 a.m. Thursday by an armed visitor, in an altercation which started inside the Emergency Department, according to SLED. The injured officer was released before noon Thursday while the suspect, who was shot when the officer returned fire, remained hospitalized.

“According to the police incident report, the officer and a (South Carolina) highway patrol officer attempted to talk with an armed visitor at the hospital’s emergency department,” said Sarah Moore, public relations coordinator at Prisma Health in a press release to media. “The visitor shot the police officer, and the officer shot the visitor in the arm while attempting to stop him. The incident is being investigated by the Greenville Health Authority Police Department and the S.C. State Law Enforcement Division.”
By mid-day on Thursday the officer had been treated for his injuries and released but the alleged gunman was still in the care of Prisma Health physicians and was expected to be booked after he was released, according to SLED spokesman Thom Berry.
“It’s my understanding from the report that it started in the Emergency Department and then continued outside,” Berry said, explaining some of the specific timeline details were still under investigation and getting worked out. “We are investigating the entire incident, not just the portion involving the officer shooting.”
Berry said no charges had yet been filed because the unnamed suspect was still under the care of Prisma Health physicians.
“That is all dependent upon what the physicians say,” Berry said, referring to the suspect’s potential release. “We have been talking with the solicitor’s office because we want to bring in local prosecutors (and) we will be ready as charges are brought.”
With the shooting taking place less than 24 hours after a shooting in Orangeburg Regional Medical Center, Moore was asked if the Prisma Health officials planned other security changes aside from scanning visitors Thursday morning, but she said at this time she could answer no more questions specific to the incident.
A Family in Fear
Additional security measures are just what Jahaza Duncan hopes to see, however, after she, her husband and teenage son overheard some of the altercation from behind a locked door where her son had been a patient in the ED.
“We had been there since about 11:30 and were signing the discharge papers and following the nurse out the door when she screamed and ran back in and threw her body against the door,” Duncan said. “We thought it was something that had hit the floor, but she told us to go in and lock the door to the bathroom, but we said, ‘Not without you.’”
Her husband called 911 and listened at the door as they huddled in the corner of the bathroom – Duncan praying over them and for the staff members who had just been caring for her son.
“Our nurse was a hero because we were seconds from being in the middle of it,” Duncan said. “It was horrible because at that point we thought the officer was shot and there was a loose gunman.” 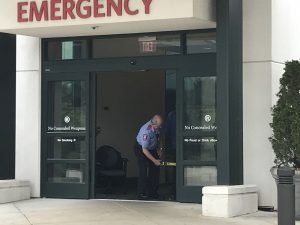 Another call to Laurens County dispatch assured Duncan that the gunman had been apprehended, and she was told the officer coming to escort them out was a Laurens County Sheriff’s Office deputy.

The LCSO officers and investigators  had responded in force to secure the crime scene until SLED came to take over the case.
Afterwards, Duncan’s one relief was that deputies told her the Greenville Health Authority Police officer was hit in the shoulder but he would be fine. Now she is saddened that violence has marred a hospital she’s always considered as a safe spot and felt especially bad for the staff there.
“When I got home, I thought about the medical staff who work so hard every day and had to care for this man who had just put them in harm’s way, and now they are facing this new fear,” Duncan said. “I’m grateful for our nurse who was a hero, and the hospital staff and how they handled it and the sheriff department who were everywhere. I don’t know what but something needs to be done to make them feel safe.”
Posted in News and tagged Clinton SC, hospital shooter, hospital shooting, Laurens County Advertiser, Laurens County SC, officer involved shooting, Prisma Health, Prisma Health Laurens County Memorial Hospital, SC Law Enforcement, Shooting, SLED, upstate SC