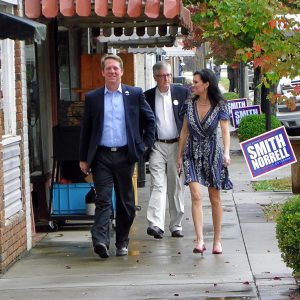 McMaster was elected South Carolina’s governor for the first time in Tuesday’s general election after ascending to the office following the resignation of former Gov. Nikki Haley, who was appointed U.S. Ambassador to the United Nations.

With 86 percent of precincts across the state reporting at press time, McMaster had carried 56.1 percent of the votes along with running mate Pamela Evette, a Traveler’s Rest entrepreneur.

McMaster, 71, has now earned his first full term as governor on a pro-business platform that was buoyed by a strong economy and falling unemployment.

“We are going to have economic growth and prosperity unlike anything we’ve ever seen because we have the best team in the United States,” McMaster said after being declared the winner.

During his visit to Gray Court Friday, Smith said when South Carolinians look behind the economic numbers, they can see that wages are still stagnating, prices for healthcare continue to rise and the state’s public schools are still ranked last in the nation.

“You can be the jobs governor without being the education governor,” said Smith, a state representative from Columbia.

Remaining in the governor’s mansion was the highlight of a sweep of the state’s top offices by Republican incumbents:

Commissioner of Agriculture: Republican Hugh Weathers was re-elected with 75.7 percent of the vote.

Secretary of Education: Molly Spearman ran unopposed after her Democratic candidate dropped out of the race and easily withstood a last-minute write-in campaign.