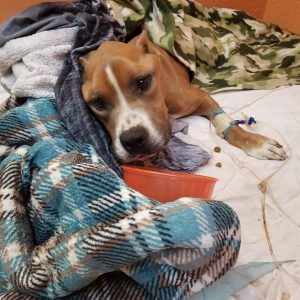 “Courage,” a pit bull, is recovering at the Clinton Animal Hospital after being nearly starved to death in a wooded area near Gray Court.

Deputies from the Laurens County Sheriff’s Office are seeking a Gray Court man in connection with a case of animal cruelty.

“Courage,” a pit bull terrier mix, was found by deputies in response to a call from a person in the Carriage Farms Court area of Gray Court. The dog was found nearly starved to death and seized by Laurens County Animal Control.

The LCSO has issued an arrest warrant for Michael Christopher Yeargin of Foothills Trail in Gray Court and were seeking his whereabouts Tuesday afternoon.

According to a release from the LCSO, the dog, which has been named “Courage” by LCAC officers, was found in a wooded area tied with a log chain. “Courage” was severely dehydrated and almost starved to death.

He was taken to the Clinton Animal Hospital, where he has received fluids and blood transfusions. In addition to starvation, the dog has severe cases of hookworms, roundworms and is riddled with other parasites. 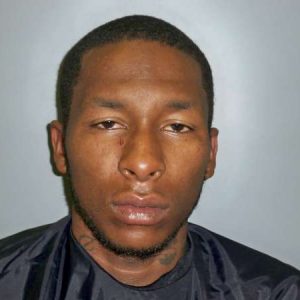 “He’s just fighting for his life,” said Clinton Animal Hospital veterinarian Dr. Julie James in a video posted to Facebook by the LCAC.

A Facebook group called “Heart of LCAC” has raised more than $2,000 for his care. According to Facebook posts, Courage began eating small amounts of food Tuesday, but “was not out of the woods yet.”

The plight of “Courage” was discovered just more than a week after Champ, a 16-month-old mastiff mix ended his treatment at a Columbia emergency vet and moved to a foster home. Champ was found nearly starved to death in Laurens by a woman allegedly seeking revenge against her ex-boyfriend, who was the dog’s owner, by not giving the tethered dog food or water for a month.

Anyone with information as to the whereabouts of Yeargin is asked to call the LCSO at 864-984-4967 or leave an anonymous tip through Crimestoppers at 864-68-CRIME.