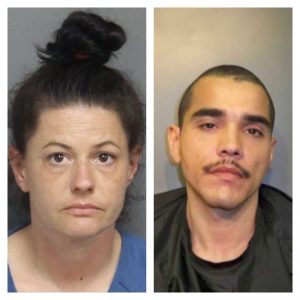 A man wanted by the S.C. Highway Patrol and a Waterloo woman were arrested by state troopers and deputies from the Laurens County Sheriff’s Office Sunday on Relax Street in Waterloo.

Kristopher Damian Burton, 37, was arrested without incident after initially locking himself in a bedroom. He was taken to the Greenwood County Detention Center and is charged with driving under suspension and failure to stop for a blue light.

Officers also discovered a firearm and drug paraphernalia at the residence, according to a report from the LCSO.

They also discovered Kerrie Rena Wilson, 39, hiding under some clothing in a closet at the residence.

Burton was also charged by the LCSO with unlawful possession of a firearm in addition to his SCHP warrants in Greenwood County.

Investigators from the Laurens County Sheriff’s Office are investigating a shooting that occurred Sunday at a residence on Tillbrook Court in Fountain Inn that sent a victim to the hospital.

The LCSO was notified of the shooting after a victim with apparent gunshot wounds to the abdomen and groin was flown from the Hillcrest Hospital to Greenville Memorial Hospital.

Several individuals were interviewed by LCSO deputies as potential witnesses, but no arrests were made. The incident remains under investigation by the LCSO.