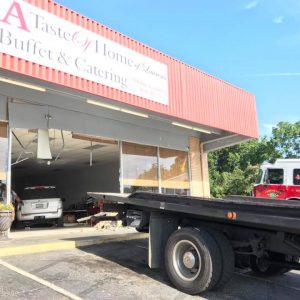 A skid truck backs up to A Taste of Home restaurant Thursday afternoon to extract the car that crashed into the building. (Judith Brown photo)

An elderly couple crashed a car into A Taste of Home restaurant Thursday afternoon.

The restaurant has been closed for the week of July 4, and no one was injured.

According to officials, the driver of the vehicle became confused and hit the accelerator instead of the break. The car lurched forward through the building’s glass facade and doorway.

Staff members were working in the kitchen area at the back of the building, which was otherwise unoccupied.