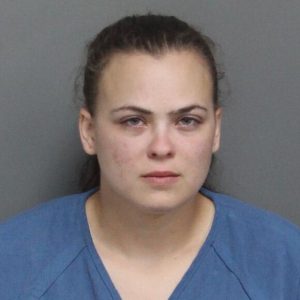 A toddler that went missing from his Clinton home Friday was found safe in the company of two family dogs about an hour after the Laurens County Sheriff’s Office was notified via a 911 call.

The 2-year-old child was reported missing from a residence on Jim’s Town Road in Clinton and had been missing for about 30 minutes prior to the 911 call being made. The child was spotted by an LCSO supervisor with its Uniformed Patrol Division about a half-mile from the residence, walking with the two black dogs down a long drive way off of Apple Orchard Road. The child and the dogs were reported by the LCSO to appear to be in good health.

The child’s mother, Victoria Calhoun, 25, was arrested and charged with unlawful conduct toward a child. According to the LCSO, she was asleep when the child went missing. Deputies also found the residence unclean with animal feces in the child’s room as well as exposed wiring and other safety hazards.

The Department of Social Services was notified as well and responded to the scene to assist with the investigation and inspection of the residence. The child has been taken into emergency protective custody.

“It’s a miracle that this child was found without serious injury or worse,” said Laurens County Sheriff Don Reynolds. “There was a creek in close proximity of the residence along with ponds in the area. We all thank God this child was found in good health because this could have easily turned out much more tragic. Children come with great responsibility and require a lot of attention. Unfortunately for this child, his mother didn’t provide the proper attention and care necessary to keep a child safe and healthy. It breaks my heart to find a child living in these conditions. Children can’t speak for themselves and don’t have a voice in these situations. This child didn’t ask to be put in this situation and shouldn’t have had to live under such horrendous conditions.”