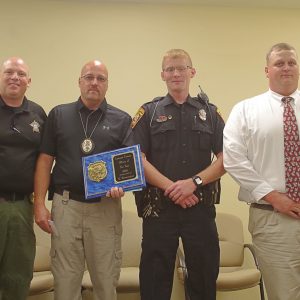 The month of May has already been monumental in the life of Laurens Police Officer J.C. Brewington.

“It’s a pretty good award because it comes from my peers,” said Brewington, a nine-year veteran of law enforcement in Laurens County.

Brewington began his career with Clinton Public Safety, served as a deputy with the Laurens County Sheriff’s Office and joined the Laurens Police Department a little over a year ago. With the LPD, he worked as one of two traffic-enforcement officers until two weeks ago when he was promoted to lead investigator.

“He’s just a fine officer,” said LPD Chief Sonny Ledda. “More than just the tactical side, I really value – and I’m sure our residents value – his compassionate side.”

Brewington has been instrumental in fundraising efforts for the Roger Rice Fund, which provides financial assistance for local police officers and their families when needed. He has helped with the fund’s annual chicken-stew sale and has said he would like to expand those efforts with other events such as a cornhole tournament.

But Ledda noted that Brewington also seeks out one-on-one involvement with people in the community. When an officer and his family were burned out of their home, Ledda said Brewington was the first to find a way to help. When a family was hungry, Brewinton reached into his own pocket to help feed them.

“J.C. is one of those officers that I found out he was at the Sav-a-lot with a lady and her grandson, and he insisted on buying them several bags of groceries and getting it to their house,” Ledda said. “In traffic control and all that stuff, he’s produced good numbers for us, but what I think he produces better for us is the community involvement.”

Brewington said he sees that sort of involvement as a big part of the job.

“Some people just need a hand,” Brewington said. “I tell people, we can’t save the world, but we can save our little corner of it.”