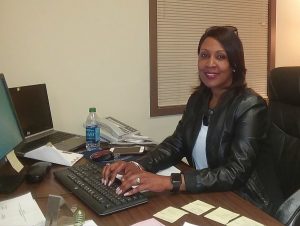 Tamara Ratliff is still finding her way around, but the newly appointed agent-in-charge of the Laurens County office of the S.C. Department of Probation, Parole and Pardon Services said she is settling in nicely after a few weeks on the job.

Ratliff, who has worked with the SCDPPPS for 20 years – all in Spartanburg County until now – started in her new post on April 2. She replaced Chad Gambrell, who took over in December as Agent-in-Charge of the agency’s Greenville County Office.

“I figure after 20 years, I’m ready to take that next step and become an agent-in-charge,” Ratliff said. “It was time for me to go on and spread my wings and have my own office.”

The Laurens County SCDPPPS office has eight full-time staff members who oversee around 700 offenders, much smaller office in terms of staff and offenders than Spartanburg County, but Ratliff said the smaller office is not without its challenges. She said she has spent the first few weeks on the job here observing and attempting to get her bearings.

Despite the differences between the Spartanburg and Laurens offices, Ratliff also sees similarities, saying that drugs and domestic and sexual violence remain significant problems in both areas. She said the Laurens office recently added a dedicated Domestic Violence Agent for Laurens and Greenwood. The Laurens office will also be adding an Offenders Supervision Specialist to solely monitor “low-risk” offenders.”

“One of the differences now is gang violence,” she said. “That’s a big thing in Spartanburg now with a lot of drive-by shootings and things like that. They’re starting a gang taskforce to focus on that. Luckily, I haven’t seen that being an issue in Laurens.”

Another difference, she said, is in the number of service providers available to her office for offenders in terms of counseling and other related services.

“We have one or two service providers, so I would love to get more service providers,” Ratliff said. “I can’t do anything about the unemployment rate, but I would like to find more people who would be willing to hire people with a criminal record because they get so discouraged and say they can’t get hired because they have a criminal record. There are a lot of places that will hire, I just have to find them in Laurens County.”

Ratliff said she has already met Laurens County Sheriff Don Reynolds and Laurens Police Chief Sonny Ledda as she gets settled into the new office, which she is still in the process of decorating. Photos of her three children sit on a shelf behind her desk.

“I’m not trying to come in and turn Laurens into a mini Spartanburg or anything,” she said. “We are fully staffed here, and we have a good crew of people, knowledgeable. I think the least amount of time any of them have here is three years, so they know the job, and it’s just a question of me getting to know them.”